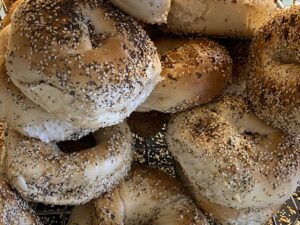 As the centuries passed, the bagel became popular throughout Europe and most recently, within the last century, it has become a household word in North America, especially in the big cities. New York being the primary bagel city. 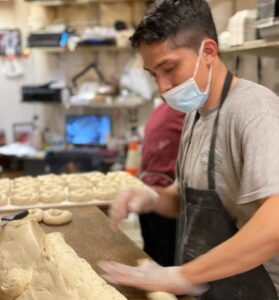 A better question would be – what is bagel dough? It is formed by mixing salt, water and yeast to make it rise, called leveling. The bagels you get at a bagel store are not automated. Instead, they are shaped by hand into a ring; hence, the original word beygal (ring). It is then boiled and afterward, baked. The result, a soft, circular, tasty firm of bread. 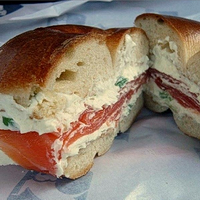 You can also add eggs, fruits, vegetables, and on and on. Of course, don’t forget the keptup. Bagel stores can offer you any combination your heart desires as well as ready-made packages too. 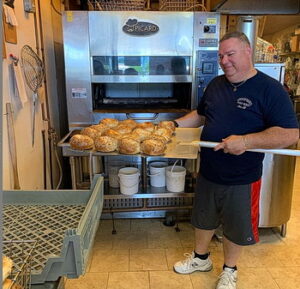 All our Bagels and Bialys are made the old-fashioned way— kettle-cooked — then baked to perfection. Our bialys, which are a popular New York bagel alternative, are chewy, SUGAR-FREE yeast rolls that are baked, and instead of a hole in the middle, they have a depression filled with moist onion and poppy seeds. 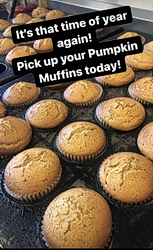 Additionally, we have fresh decaf that is made with natural water. No chemicals are used to extract the caffeine. And now with fall 🌞 here,try our fresh pumpkin muffins!

We have a nice assortment of cream cheese for your breakfast. And our bagels and bialys are in packaged 2-3 plastic bags that can be placed in your freezer for prolonged enjoyment!

Whatever you choose, you won’t be disappointed with the authentic New York taste and freshness.

Check out our blog page for a history of ‘The Bagel’ as well as advice on how to keep healthy! And while you’re at it, why not enjoy our fresh, cold cappuccino? 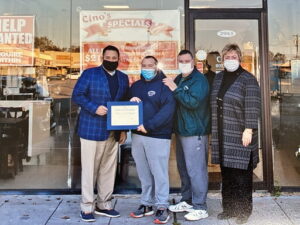 We are a 3rd generation, family-owned and operated business in Oceanside, New York.

We have over 30 years of bagel-making experience and we invite you to come to taste the difference in our freshly made bagels the old-fashioned way, by kettle cooking and baking to perfection.

To enjoy your bagel like a true New Yorker, you must have the freshest of everything and we can ensure that all of our bagel products and spreads are made by hand daily, using only the freshest ingredients available. 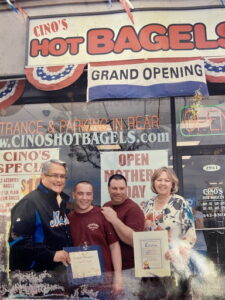 Cino’s Hot Bagels serves our community and beyond, with the home-baked flavor you would expect from a New York bagel. And don’t forget our freshly made coffee and cappuccino to top off your breakfast!

Oh, and by the way, we serve great-tasting sandwiches too!