Ah, coffee! The quintessential wake me up in the morning, get up and go drink. But is coffee really good for you? Well, for the most part, yes as it has antioxidants that help kill those scary free radicals in your body and consequently, helps to reduce oxidative stress.

But you are saying huh?? What? Don’t worry, we won’t let you hang with these unfamiliar terms without giving an explanation, as well as providing the benefits that can result. We will also discuss what we can do to keep free radicals at bay.

We’d like to note that there may be some negative effects to drinking coffee. If you’d like to know more about coffee’s possible adverse effects, click here.

Let’s Start by Talking About Oxidative Stress – What is It?

Oxidative stress is the process where cells are oxidized and in the case of the cells in the human body, they will die, specifically, in the brain. So the idea is to minimize these reactions.

The cells in the brain are called neurons. There are billions of them in our brains and they communicate by sending impulses to each other which creates thought and maintains memory. This process is the psychological representation of how we think.

Neurons can get damaged by some nasty fellers called free radicals, which are cells that contain missing electrons. Since free radicals are lacking electrons, they look for neurons that have the electrons they need, and subsequently, they attempt to steal them from healthy cells and then the neurons become defective. This can inhibit the cells from making contact with other neurons, which can result in damaging the cognitive process in the brain.

With that said, it would take billions of these mutations to actually cause a brain malfunction; however, the more that free radicals are free to rob and steal (the more they keep attacking healthy cells), the more hazardous it can become for us.

So, What are the Actual Consequences of Oxidative Stress?

Loss of memory is one possibility, but the situation can get worse if the free radicals are not contained. Oxidation can also cause fatigue, eyesight issues, headaches, and increased susceptibility to infections by diminishing the immune system. Studies have shown that they may also be responsible for age-related wrinkles and gray hair, so seniors take note! The risk of acquiring diseases such as Parkinson’s or Alzheimer’s Disease is also a possibility.

How Do We Keep Free Radicals at Bay?

Simple. Eat the right foods and drink the right drinks!

Eat and drink foods that contain antioxidants – the entities that fight off the free radicals, so the more antioxidants in our bodies, the stronger our immune systems and the healthier we can be. 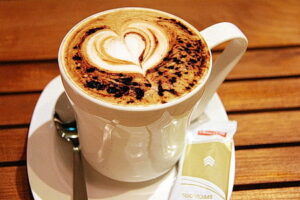 A study by the Laboratory of Neuroscience in Boston has stated that: “Coffee can have direct effects on the brain and also reduces oxidative stress and inflammation.”

So, coffee is rich in antioxidants. The result is you are actually drinking an antioxidant booster, so one (or more – but in moderation) coffee cups per day may actually keep the doctor away!